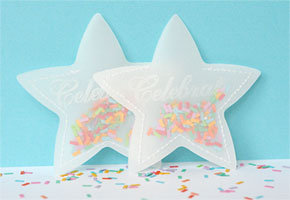 Bridal showers are always fun. But throw in the New Year’s season plus a co-ed guest list, and you up the fun factor to extra festive! And what says holiday revelry better than confetti? So we put together 5 shower favor suggestions that have confetti cuteness sprinkled all over them. You may end up choosing 2 or 3!

Confetti! So Colorful and Festive 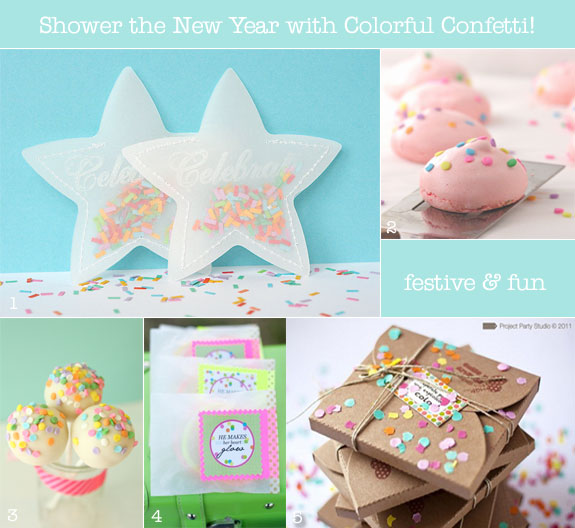 1 – How delightful are these star-shaped confetti packets we found on Attention 2 Detail Events? Crafted from vellum cutouts stitched together, just fill them with your choice of colorful paper snippets and have a confetti toss for the bride-to-be. As the stamped print on them says, “Celebrate!”

2 – For a melt-in-your-mouth treat, try these Raspberry Confetti Kisses! They look like adorable little meringues, don’t they? But as Ruthanne of Easy Baked explains, they’re made with raspberry Jell-O. Then, she topped them with confetti sprinkles for that New Year’s touch!

3 – Couldn’t leave out everyone’s fave pops! So we found these darling confetti-covered cake pops over at Sweet Little Details. The recipe is included in this post, so have a blast making your own. Just add some New Year trimmings and they’re good to give!

4 – Festive packaging is a must, too. So take a tip from these brightly-wrapped favor packets with the cutest confetti tags! They’re from a neon-inspired bridal shower by A Styled Fete (featured on Anders Ruff) and have glow-in-the-dark bracelets tucked inside. Hhhhmmm…now there’s another fab New Year’s favor idea for you!

5 – These are actually confetti-filled invitations designed by Project Party Studio (found via Bloved Weddings). But these kraft board enclosures could actually be filled with any sweet gift item of your choice—plus confetti added to burst out when guests open them!

From Our Party Suite Blog

We are a participant in the Amazon Services LLC Associates Program, an affiliate advertising program designed to provide a means for us to earn fees by linking to Amazon.com and affiliated sites. Some posts may contain affiliate links and if these are clicked, Bellenza, Inc. may earn a commission when your click results in a purchase. Not every link is a an affiliate link.

Deal of the Month at the Bellenza SHOP